So often when we see pop culture portrayals of trans people’s lives, hear stories shared by trans people about their transitions, or accounts by the media about trans people’s lives, those stories focus on misery and discomfort. Gender dysphoria, a feeling of deep discomfort with your birth-assigned gender, is a powerful catalyst for many non-cisgender people coming out or transitioning, but it’s not the be all and end all of our experiences.

For many non cisgender people, it’s not gender dysphoria that pushes forward transition, but gender euphoria, a powerful feeling of happiness experienced as a result of moving away from that birth-assigned gender. It’s that joy the first time a parent calls you by your new chosen name, or the first time you have the confidence to cut your hair short like you’ve always wanted, joy at embracing the self.

Featuring essays from 15 trans, non-binary, agender, gender fluid, and intersex authors, as well as several essays from author and trans woman Laura Kate Dale, Gender Euphoria: Stories of Joy from Trans, Non Binary and Intersex Writers seeks to show the world the sheer variety of ways being non cisgender can be a beautiful, joyful experience.

Laura Kate Dale has experienced countless moments of elation, pride, confidence, freedom, and ecstasy as a direct result of coming out as a trans woman the better part of a decade ago, and she is not alone. There are countless stories from trans, non binary, agender, gender fluid, and intersex people about the ways that coming to terms with gender brought unimaginable happiness and love into lives. 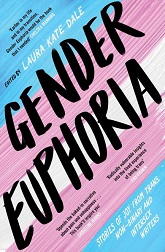